At the beginning of the 1940s there were 2743 Jews living in Komárno; only 248 survived the Holocaust, and today the community has just 58 registered members.

Has Komárno managed to work through this deep incision in its history? And how does a Komárner living abroad, rarely returning home, see the situation, especially as it has developed over the last 20 years? «Step by Step» is a film about empathy and indifference, and a sequel to «Memories for the Future» and «Naive Dreams».

The brothers Tamás and András Paszternák, members of the so-called 'third generation' of Holocaust survivors, took the initiative as teenagers in the 1990s to breathe new life into the Jewish community. They started to organize religious services and cultural events and created a community newspaper. The film shows their commitment, follows the voices of Komárno's citizens and authorities, but also those who left Komárno but still regularly return for the local Holocaust Memorial Day. In addition, the history of the Jews in Komárno is discussed, as is – in speeches on Memorial Day and in talks with Jewish and non-Jewish citizens – the resurgence of anti-Semitism. Despite the latter, hope still prevails, as the Jewish community centre with its small, beautiful synagogue has been renovated, in particular thanks to donations from former Komárners living abroad. In addition, a memorial stone was erected in 2017 in the place on the Danube where Jews were shot and thrown into the river.

Step by step, relationships between survivors, their descendants and the majority population are developing in the microcosm of Komárno. Inevitably, questions arise: how long does the process have to continue 'step by step', how many steps are necessary and who has to take them?

Topics from the film: 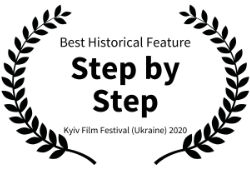